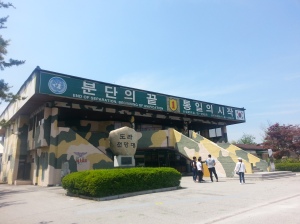 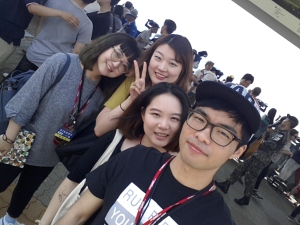 On May 21 (Sat.), our visit to DMZ, namely, Demilitarized Zone, started from Yongsan Station. After arriving at Imjingang Station by DMZ train, we were firstly guided to have a walk in Dorasan Pyeonghwa Gongwon (Dorasan Peace Park), which was started its architectural planning since the opening of Dorasan Station in 2002 with the donation to “Unification Forest” by Gyeonggi provincials. In a pavilion, a variety of old pictures and relics of war help our today’s young people better understand the history of DMZ and the value of peace and ecology, especially for the people during the war period.

Later on, standing on Dora observatory, we had a far-seeing about Kaesong city in North Hwanghae Province in the southern part of North Korea, as well as Kaesong Industrial Region.

Finally, down to about 80m below ground, at the end of No.3 tunnel, our last destination, we were physically so close to North Korea, only by a partition in the middle. Watching the other side through a small window, we’ve never imagined war, in fact, could be triggered at any moment; but more important, we realized due to historical and political issues, how much pain of separation from family and friends the people in Korean Peninsula have to suffer.

Back to ‘reality’, we learnt that the relationship between South Korea and North Korea still has a long way to go forward, and hopefully, other countries in the world could make a little contribution to bring more peace and harmony to those innocent people.